Things I miss about Baltimore

Obviously, my recent trip back to Baltimore for the Maryland Film Festival didn’t go as well as I had hoped. It did remind me of some of the reasons I left Charm City so in that regard it wasn’t a total loss. However, for the sake of fairness, I’ve decided to compile a brief list of some of the things I miss about Baltimore.

I got to the light rail stop on Baltimore Street around 4pm and when I got to the ticket vending machine I could hear an old black man singing Bob Marley slightly off key to himself coming up from my south. As I’m putting my money into the machine I can literally feel him breathing on my neck.

“Do you mind? I’m trying to do something here.”

“Ain’t no-one gettin’ yo way, I just here to collect my change from dat ‘chine chu at.”

“Could you at least find somewhere else to stand?”

Perfect, now I have to explain a disease I was never officially diagnosed with to someone who more than likely only “asked” that as an insult. I collect my ticket AND my change (since I had to get back somehow) from the tray and crossed over to the northbound track as my “friend” ranted on.

“Bah,” he said waving his hand dismissively as he continued up the street. “Nah wooomah nooo cryyyyy.”

The train arrives. I get off at Mt Royal and head into the Barnes & Noble where I accidently insulted the barista working there while trying to make small talk. I try to come up with a way to apologize and/or explain when the manager appears, and asks what I want to drink. When I tell her, she cuts me off with a giant smirk saying:

“Decaf? Oh darn, we are compleeeetely out of decaffeinated beans. Looks like you’ll have to go SOMEWHERE ELSE for your beverage! Sorry about that, have a nice day.”

“Yes, I will,” I said ignoring her retaliatory display.

We BOTH knew there is no such thing as “decaffeinated beans,” but I might as well let her think she “won.”

Besides, my film was in 20 minutes, I could just head to the venue and find a seat…which was a pretty good idea as said screening was nearly sold out (something I take partial credit for). Fortunately, it was only an hour long and I found myself in the shortest Chipotle line I’d ever encountered in Baltimore.

With that formality out of the way, it was time to get back (yes, the room was turned this time) and hammer out my thoughts on my second film and rewrite the review from this morning. This was going to be a long night… 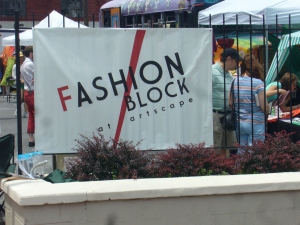 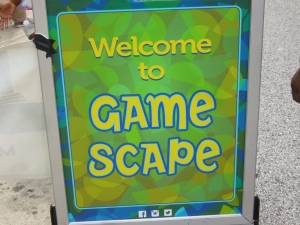 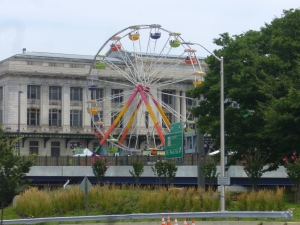 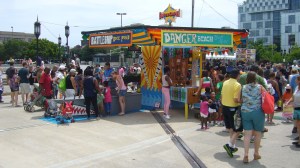 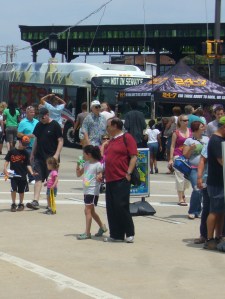 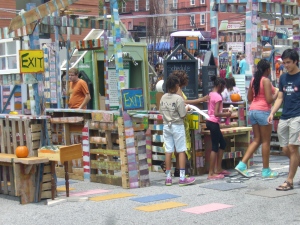 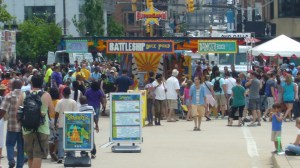 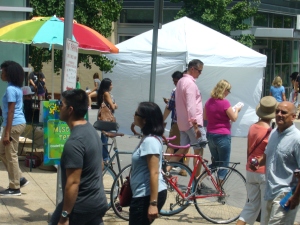 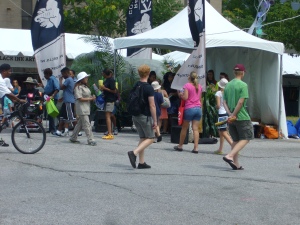 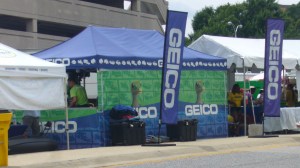 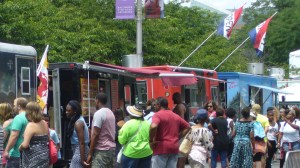 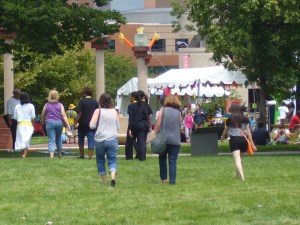 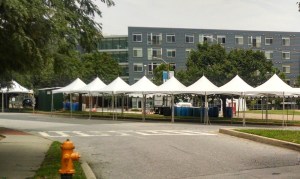 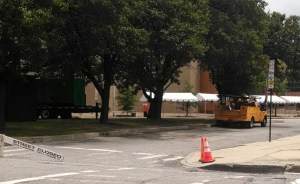 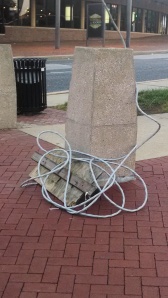 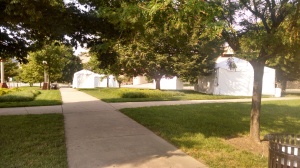 Every year it seems like preparations for Artscape get earlier and earlier. Here are some pictures I took of the placement of power boxes and prewiring for such boxes mainly along Mount Royal Avenue (the one with the construction crew was on Preston St just behind Cultural Center station) 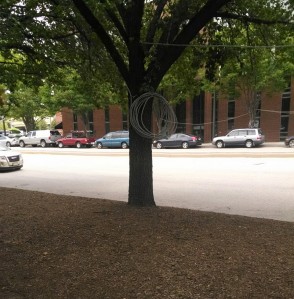 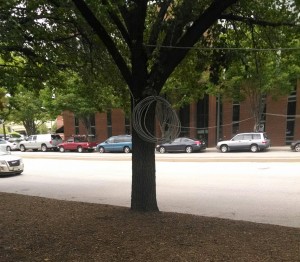 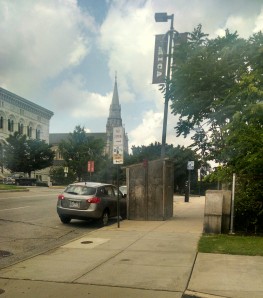 I left the apartment at exactly noon, and was surprised to find the neighborhood buzzing with activity: Road work in front of my building, crews installing power boxes for Artscape (see separate post) and even a purported “waterline break” on Bolton Street. I arrive at the light rail station and just as I finish paying for my ticket I can see the train pull around the corner. It’s called “timing” and every once in a while I accidentally do well with it.

It was a Cromwell train and it was packed with black hats and orange T-shirts. I know this is Baltimore and they are going to an Orioles game (including an adorable 7yo sitting across from me who looked like he was going to explode with excitement), but it always disappoints me to see orange without the requisite green\white (see my header image, one of them anyway).

Not surprisingly, the entire area around Convention Center was packed with people in tents selling “Tay-shots” and an army of people with coolers selling “eizz woddah, cod sotta and Gottahaid” (Gatorade, though I initially thought they were shouting “God-I-hate” which is fitting for a Canes fan describing a UF product).

I eventually made it to Harborplace which was slightly busier than usual but still slow for a weekend in summer. Sure there were street performers (of varying quality) and tourists getting their pictures taken in front of Ripleys or the tall ships or with that ugly fish thing in front of Barnes & Noble… but the place still felt dead.

I went over to Maryland Science Center even though the show I wanted to see wasn’t for another 2 hours. They have IMAX – in fact, there were three shows between my arrival and when the planetarium show started at 3:15…unfortunately, I’d seen them already so I went back to Harborplace to find something to eat (which is good exercise AND it kills time).

I arrived at Five Guys at 1:04pm, and it was a madhouse though, oddly enough, not a single person was wearing orange (though your friendly neighborhood blogger was wearing a green\white overshirt). There was a long line at the register and an even longer wait (11 minutes) to get my overpriced fast food, but then again it filled time…yet somehow I was out of there by 1:30pm.

I took a slow walk through the souvenir shops. They have some interesting stuff down there (not that I’d buy any of it), but what really struck me was that they took out both the “skybridge” over Pratt Street AND, more infuriatingly, the M&T branch that was at the base of it (seriously, there are – sorry were – only two M&T locations downtown – the one on Pratt and the one on Howard). I almost picked up a copy of Baltimore magazine at B&N, but I didn’t feel like carrying a bag around with me the rest of the day advertising myself as a “tourist.”

There was zero line to get into MSC, though there was a large black and yellow air cannon parked next to the window, and I actually had more than enough time to use the ATM, restrooms and roam the gift shop ($25 for a 12 year old IMAX movie, really?) before my show started. For the record, I and the seven other guests attending the show were on time, but the doors opened two minutes late which I suppose isn’t too bad for a tourist trap. I wished I liked the show better, as it had an interesting topic (the quest to get people back to the moon by an unspecified “deadline”) but felt more like an infomercial than an actual movie (see TheInternship, 2013).

The show got out at 3:40pm, and I had more than enough time to sit at one of the benches and write out some of my thoughts about the day before heading downstairs. I really hate sitting down on the lower level as it always gives me a splitting headache. I know it’s the noise (as there is no other word for it) and that it would be a LOT worse on a “busy” day, but I am so glad I don’t have to work there on a daily basis.

The show was actually delayed for several minutes to allow them to “clean up the theater” from the previous show (which had also started late), but my “MSC headache” was too bad for me to care. However, I was extremely disappointed in the fact that I was the only person in the theater (even though I heard several people talking about seeing the film). I was out of the film at 4:45pm.

I was midway way down the steps from an unabashedly jingoistic movie about the British bombing Fort McHenry when I heard an almost deafening “BOOM” from about 20 feet below me. I knew it was “only” the air cannon (which was applauded heavily), but I was literally halfway through a step when I jumped and nearly fell face first down a full flight of stairs (thank god, I happened to have my hand on the wooden rail otherwise I’d probably be dead right now).

When I got to the bottom of the steps, I was still literally shaking, and I could sense people staring at me. I walked quickly around the back of the ramp, across the front of the lobby covering my reddened face with my hat and tried to assimilate myself into the mass of orange shirts and black hats flooding the promenade…

These are shots I took of construction I saw around downtown today. I apologize for the quality of these photos. I didn’t have my camera with me (as I was only out on errands) so these shots were taken on a camera phone.

Crews work on a catenary wire at Convention Street Station.

Crews work on a catenary wire at the Convention Center Station

A new deck being constructed at Phillips Seafood at Power Plant.

A house having exterior renovations in Bolton Hill.

A worker outside a townhouse in Bolton Hill.