Day 7: I bought milk this afternoon. The store wasn’t particularly crowded, and, unlike the Walgreens next door, it was relatively well-stocked (and grocery stockers are getting very good hours lately). I had to laugh that they were short on beer except Corona Extra… and Heineken. What the heck did Heineken do, lol?

I saw a news story when I got back that both ICON Park and FunSpot America (in Orlando and Kissimmee as well as their park in Atlanta) are “closing indefinitely” as of Monday. Disney, Universal and SeaWorld closed last weekend. This means that everything fun in this city is officially closed. The I-Ride Trolley, is still running though (as Publix, CVS and Walgreens are still open)

Day 8: I spent the morning looking at apartment listings online. There are several new units available in both Baltimore and Bethlehem (PA) that are available within my timeframe… but they are not holding “open houses” nor can I schedule a “showing” due to the virus.

I spent the afternoon paying bills (because no-one else is going to) even though they legally cannot shut off my electricity/water service due to the quarantine. I also filled out the Census form online. It took slightly longer than they promised as I accidentally tossed the envelope with the “log-in” information. However, since I am the only person living at this address, it only took me about 10 minutes to complete.

Day 9: Woken up by landscaping crew (who usually work on Wednesdays) a full hour before my alarm went off. Also, “valet trash” is still being offered. Nice to see at least some things remain the same in these uncertain times.

I didn’t particularly want to do it after the disastrous delivery on Thursday, but I bought milk off Instacart (and due to their “minimum purchase” guidelines, I ended up buying a lot of junk too). While they didn’t have the kind of milk I wanted, everything else was in stock and the items arrived an hour ahead of schedule with zero notification from the app of this happening until the driver knocked on my door, but, then again, it did arrive, so I can’t complain…

Day 10: Next week is April 1st. Which means I need to find something fun to do that won’t piss off my followers (like, ahem, last year’s post). It also means I have to prepare one or more “Autis-meme” posts. I have more than enough memes for ten of those posts… but the truth is, I’d only curate them not because I “want” to but because it feels like I HAVE to. However, it is a nice change from constant virus coverage…

Speaking of change, I just received an email notifying me that the complex I’m renting at is going to be run by a different management company. That by itself isn’t necessarily bad news, but experience shows it’s rarely good news either. It’s also pretty strong motivation to keep up the apt search.

Day 11: Quite a lot of activity (and noise) on the sandlot at 8 o’clock this morning, pity it was a full hour before my alarm goes off. However, it will stop suddenly around 10am, and then nothing will happen for the rest of the week.

And I called it, so I went back to bed…which means I laid there uncomfortably staring at the ceiling with my eyes closed for about two hours wondering why: If I was so tired, why I wasn’t asleep? The same thing will happen tonight, but it will be for six hours.

Day 12: I ordered milk (and a few other things to meet minimum purchase price) off Instacart… which was good timing on my part as not only did I get my items in less than 2hrs, but, more importantly, I found out that their workers are planning a “general strike” on Monday for higher pay and actual health benefits – kind of important in times like this.

Also, Disney and LEGOLAND Florida have pushed back their opening dates until midway through the month. Meanwhile, Busch Gardens and SeaWorld are now closed “until further notice” and have furloughed 90% of their workers (possibly so they qualify for Unemployment benefits).

Day 13: Woke up today feeling like I had a moderate cold, but that seems to have at least partially cleared up since then. I don’t have a fever, so it could be allergies. The point is, I probably don’t have the virus. Even then, it’s not like I’m going anywhere this weekend anyway…

Photos: The Wheel at ICON Park

5:01pm – The pouring rain we’ve had for most of the day is finally gone. I check the radar on TWC and it’s clear through midnight, so I showered, got dressed, unplugged my phone (100% charged) and got ready to do some photographing.

5:35pm – As soon as I open the door to my condo, I heard thunder…or was it fireworks (it’s hard to tell on July 4th). The sky is half blue, half charcoal so it could go either way.

5:48pm – Trolley arrives. Unfortunately, it’s also “FULL.” It’s also raining out, and my rain gear is back in the unit (because TWC said it wasn’t supposed to rain for the rest of the evening). Now the entire state is red/green/yellow again.

5:56pm – Trolley #2 arrives. It is not completely full like the last one, but it was two stops later. Ugh, I hate super crowded buses.

6:08pm – arrive at Coca-Cola Orlando Eye complex, and stop at the Outback near the trolley drop-off. Hopefully, eating will ease my suddenly sour stomach.

6:15pm – as expected, it was crowded (mostly by people waiting out the rain). I was fortunate enough to be seated immediately at the bar.

7:28pm – Leave restaurant, and the rain IS gone. The sky is clear, but it isn’t dark enough for fireworks yet so I decide to take some pictures around the immediate area to kill time. Yes, my stomach feels better.

7:36pm – Decide to get some ice cream and make my way toward the courtyard. It is surprisingly crowded considering the rain ended less than 20 minutes ago (sidewalk and artificial turf are dry too)

8:13pm – post a bunch of photos to the FB page. I probably should have posted them here…. I still can, hold on. Done, I love WP’s “backdating” feature.

8:27pm – Sunset, however my phone is at about 33% so the planned “Live” video of the fireworks show is called off.

8:43pm – The trolley back to my condo arrives… with exactly four other passengers on it.

8:59pm – arrive back at the condo where there is a near constant booming from fireworks that I know aren’t part of some official show. It will probably keep up like this all night.

9:13pm – I log back into FB on my laptop as my phone charges. I feel horrible about going back on the promise to my followers to “go live” with the fireworks.

9:37pm – a loud rumble of thunder puts the noise outside to an immediate stop. I’m hoping for a huge storm so I can get some sleep, but, no, the auxiliary show continued less than 10 seconds later.

9:47pm – Stomach is acting up again. I may end up spending the entirety of SeaWorld’s Fourth show in the bathroom. I never liked fireworks anyway… 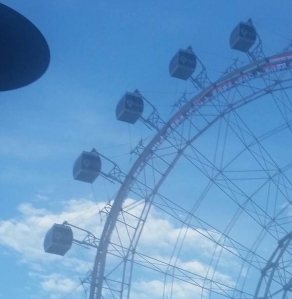 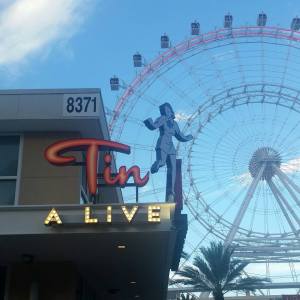 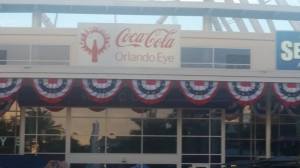 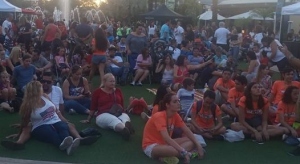 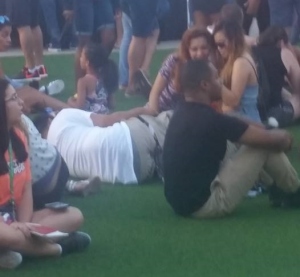