My dishwasher has been out of commission for the past week or so, but they finally sent someone up to “fix” it this afternoon – and by “fix” I mean they ran half an empty cycle before deciding it was “good enough” for me to use (even though that’s exactly what they did LAST time I reported this and obviously, it worked because I reported it again).

Since my dishwasher was out of service, I have been forced to hand wash my dishes, so I didn’t have a huge reserve available for a test load. However, I did it anyway, but since I hate the amount of noise it makes when it’s running so I went out to eat at the Golden Corral on I-Drive (in the plaza as Cici’s and 1-2-3 Dollar).

Anyway, I leave the apartment and when the trolley arrives, I sit in the front row behind the driver and across from a young family visiting from DC who were complaining that their 2yo daughter couldn’t get on any rides at the Magic Kingdom.

“Come on, you think Disney, you think ‘KIDS.’ So, of course, I took my kids (ages 2 and 1.5) with me, but the only ride they were tall enough to ride was fricken Dumbo. I’m sooo glad we paid all that money to get into a KIDS park without any kids rides. Grrr, what a rip-off (neglecting to mention that both of his kids got in free, and that height requirements for all rides are easily found online). We’re going to take the trolley to Discovery Zone or SeaWorld tomorrow afternoon – at least THEY have kids’ rides.”

Suddenly, he leans forward and taps the driver on the shoulder, he then gestures towards me and says:

“Buddy here’s got a question for you.”

“No, no, buddy, it’s okay. You’re allowed to ask questions here. Go on, I got his attention for you.”

“What ‘question?’ I don’t HAVE a ‘question.’ Why do I need to come up with a question I don’t have to ask the driver when I was trying to tell you about Discovery Cove? Then he can answer the question you are forcing me to come up with, so you can justify getting his attention, so I can tell you more about SeaWorld and Discovery Cove.”

That’s the point when his real message finally hit me. Fortunately, because I’m crazy and stupid, he gave a nice summary of his ordeal…

“God, buddy, what is your problem? I’m trying to be NICE to you here, you freakin’ jerk.”

Am I your “buddy” or am I a “freakin’ jerk,” make up your mind? However, I have been doing this blog long enough to know “what is your problem” is an insult. Period. I can give a wonderful explanation of Aspergers’ and Autism completely on the fly (okay, not really), but it would invariably fall on deaf ears because no presumably smart and/or sane person likes (as a far blunter observer once put it) “being lectured by crazy-ass retards.”

The Golden Corral is stop 31, and when I got off “buddy” was his buddy again. Also, crossing southern I-Drive can be tricky at times, but I managed to get across pretty easily. The parking lot was unusually full, there was no line to get into the restaurant nor did I have any particular trouble finding a table.

I’m never sure if I’m supposed to wait for my server to stop by and “sign” my check or just go up to the buffet, but since the former is usually easier, that’s the one I chose. I came back to my booth and the check was signed so all was good.

She came back as I was eating to find out if I wanted another drink which I declined, but instead of going away, she stepped closer, taking my plate, asking what kind it was and I repeated I “wasn’t ready” for another drink at which point she makes a sassy comment about “I was asking for next time” and storms off as if I did something wrong (or at least not intentionally).

I go up to get my second (and last) round of food. I am nearly finished, and had opened my wallet to see if I had enough to give her a tip when I hear a sharp: “You want another root beer?”

I tried to tell her “no” because I was busy, but instead of going away, she comes right up to my table, essentially blocking me in and says “I couldn’t hear you from back there. What did you need again?”

“I’m trying to determine if I have enough money for a tip, so I can leave the restaurant without getting another drink.”

“Well since I don’t have $4 on me, I guess I might as well give her 15%. Yes, I already answered your question: I said I needed to ‘figure out your tip so I can leave your store without getting another drink.’”

“There is something seriously WRONG with you,” she said as if I couldn’t hear her. “Who the hell gets scared by someone asking for another drink from four tables away?”

It was technically TWO, and she were saying it rather loudly – just as she had the “questions” poste above. At least she got out of my way to “ask” them. It wasn’t until I got the first exit door that I realized the irony of this evening’s conversations.

Fortunately, when I went to the discount grocery store next door, the cashier barely spoke to me. She coldly rung up my order, and we didn’t talk. It was quite refreshing actually… kind of like coming back to mostly clean dishes. 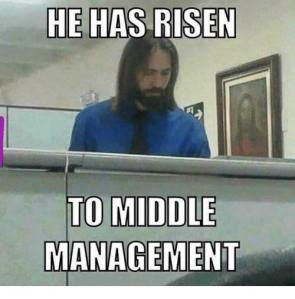